Are Air Conditioning Units Harmful to the Environment?

During the sweltering months of summer, we all rely on our air conditioning systems to keep us cool. Not only is it more comfortable, but for some, it's essential for safety. Those with respiratory issues, allergies, and other health conditions could suffer serious side effects without the mechanically cooled running throughout their homes. However, while we're all keeping ourselves cool and cozy inside, are the air conditioning units we're using dangerous for the environment outside? Air conditioning units are bad for the environment in part. The hydrofluorocarbons (HFCs) and chlorofluorocarbons (CFCs) emit pollutants that put holes in the ozone. AC systems require enormous amounts of energy to operate, and fossil fuels burned for electricity contribute to ozone depletion.

It's known that heat can cause fatalities. The CDC reports that up to 600 people die in the United States annually from extreme heat conditions. So, if you want to stay safe and do your part to protect the environment, what choices do you have? Take a few minutes to learn more about what kinds of air conditioning systems are out there, and how you can enjoy the best of both worlds through environmentally friendly AC unit options.

If you've heard of the 'greenhouse effect,' then you comprehend what global warming is. By definition, global warming is the result of the atmosphere trapping heat coming from Earth and radiating towards space. In the past few decades, scientists have reported the highest temperatures on record. The conclusion is that we're emitting more and more of these harmful gas types through the daily lives we lead.

Cars, appliances, factories, and other essential pieces of producing pollution by using energy or electricity in various forms. The pollution, or harmful gasses, is what causes the depletion of the ozone layer.

Different types of gasses are emitted at all times around the globe. Some of them are long-lived gasses, while others are semi-permanent. Some react physically or chemically, while others do not. Those that don't respond are considered to be the primary force behind climate change. The gasses that do react are referred to as 'feedbacks' by researchers.

The different gases that are contributing to global warming and the greenhouse effect include:

People are the primary reason for global warming, and all of the problems aren't because of the operation of air conditioning units. While the systems produce a fraction of the harmful greenhouse gasses, there are plenty of other contributing factors that scientists are keeping an eye on.

When you think of pollution, does your mind picture garbage lying alongside the highway or on the beach? Maybe you think of the enormous amount of gas emissions that can be seen for miles from some industrial locations. What we don't think of is our air conditioning system.

Turning on your AC unit at the start of summer doesn't create much of a scene. If it's old, you might hear a bit of spitting and a sputter. There could be a leak here or there. You likely don't think, "this air conditioner is harming the environment because of all the pollution!"

What we can't see with our own eyes is often challenging to comprehend.

Besides trash and the visible smoke coming from stacks at your local manufacturing plant, other elements are considered to be pollutants and disastrous for the atmosphere and environment. The invisible gases found in AC units create pollution, but in a way that we don't always think about. Now that you know that several different gas types lead to environmental issues, we can discuss which of these come from air conditioning systems. When manufacturers first started producing air conditioning units, a liquid refrigerant, the CFCs mentioned, was used to create the cooling effect.

Today, CFCs are no longer used in more modern cooling equipment because scientists have discovered that they are so devastating to the environment. Now, HFCs are used as the refrigerant instead. Let's briefly discuss the difference between these two compounds.

Hydrofluorocarbons and chlorofluorocarbons are both damaging to the atmosphere. However, one is no longer used because of just how much it has contributed to global warming. Why are HFCs more widely accepted today?

When the burning or combustion takes place, oxygen in the air combines with fossil fuels. The end result is carbon dioxide and water vapor, both being released into the air and traveling towards the atmosphere.

While air conditioning units don't produce CO2 from the system itself, the devices require a lot of electricity to run. Where does the electricity come from? The burning of hydrocarbon fuels.

How Much CO2 Do AC Units Emit?

The EIA U.S. Energy Information Administration reported that in 2009, 87% of homes in the United States had some form of air conditioning equipment. That is up from a previous report of 68% of residential locations having AC in 1993. The trend is continuing on the same projection, with expectations being nearly every home having AC eventually. With the most current findings, it's estimated that up to 6% of all energy use comes from air conditioners alone. That translates into somewhere around 100 million tons of carbon dioxide being sent towards the ozone each year.

Let's go back and review the question, "Are air conditioning units bad for the environment?" Turning on your air conditioner isn't going to release CO2, but the power required to run the equipment is leading to the damaging CO2 emissions. What Other Negative Effects Do Air Conditioners Have?

If it's been proven that air conditioners are that terrible for the environment, does it leave you asking how good they are for your health? While the dangerous gases are being released towards the atmosphere, what about what's happening inside your home? Is it really worth staying cool during the warmer seasons, or should you try and tough it out?

Some of the adverse effects that are associated with operations of AC units include:

The quick answer is you should never risk your life because of overheating by not taking advantage of an air conditioning system being operational in your home or workspace. The most crucial action you can take is what you're doing right now by arming yourself with knowledge about the possible effects. With these details, you know what to watch out for, and you can adjust accordingly. By taking the right steps, you can enjoy air conditioning in your residence without any health issues and minimal disruption to the environment.

We mentioned that air conditioners used to be manufactured with the now-outlawed CFC refrigerant. The newer models being introduced are implementing more environmentally-safe HFC refrigerants, making them all technically more friendly for the slowly depleting ozone layer.

Bonus Tip: Instead of running your air conditioner on days during the summer when it's really not all that warm, put a fan in the window to circulate the air. 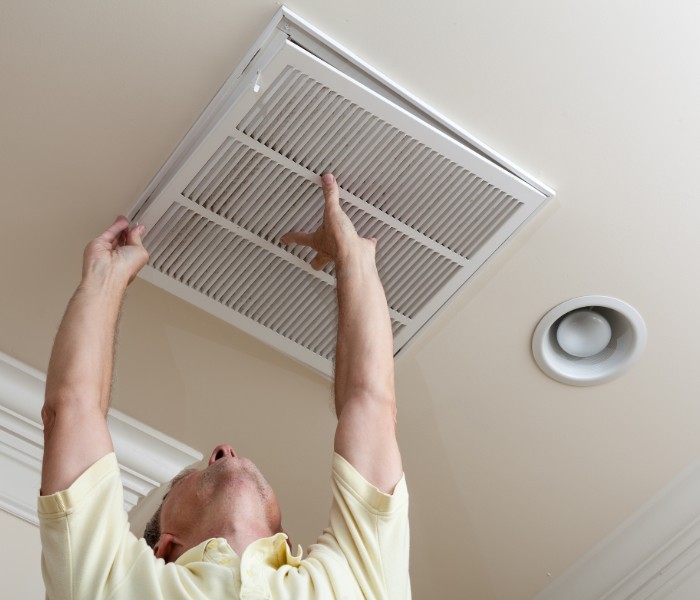 How to Choose the Best Air Conditioning System

Before you take the plunge and purchase a new air conditioner for your home or business, you should know what options are available. Some of the choices you have to include:

The version that's ideal for you will depend on your budget, the space you're trying to cool, and the region you live in. Trust your HVAC contractor to discuss all of these more in-depth to better understand what to expect.

After you decide with your HVAC company professional what type of AC unit you want, there are a few other factors to put into action before making the final purchase.

The Energy-Star certification sticker shows that the product has met the guidelines set forth by the Environmental Protection Agency. That means your air conditioner isn't as bad for the environment as AC units that haven't been certified.

An air conditioner that is too small is going to work harder, producing more pollution. A device that's too big will waste energy.

Don't run your AC equipment if it isn't absolutely necessary. Keep your blinds closed when the sun is at its peak to keep the light and heat out. Run fans to keep the air circulating. Replace heat-producing incandescent light bulbs with LEDs.

Air conditioners can get costly, so before you make a significant investment in a new cooling system, make sure you know exactly what you need to cool the inside of your property while also taking the right steps to protect our precious environment.

Now that you've heard it all, are you still wondering what the best option is? If air conditioning systems are bad for the environment, how can you stay cool, comfortable, and safe? To break down the main points, yes, AC equipment does emit pollution with CO2 from energy use and HFCs. However, you require this equipment in your home or commercial location to remain protected from the rising temperatures outside. So, how can you have the best of both worlds?

It's possible in 3 easy steps:

There's no possibility that air conditioning is going away now that we have discovered all the luxuries that come with the complex cooling equipment available. You can expect more research on global warming, the greenhouse effect, and what manufacturers and consumers can do to help protect the ozone layer.

You have the information you need, so it's up to you to go out and make the changes necessary. Contact your local HVAC company if you think an AC replacement is in your near future. A reputable one will lead you in the right direction. 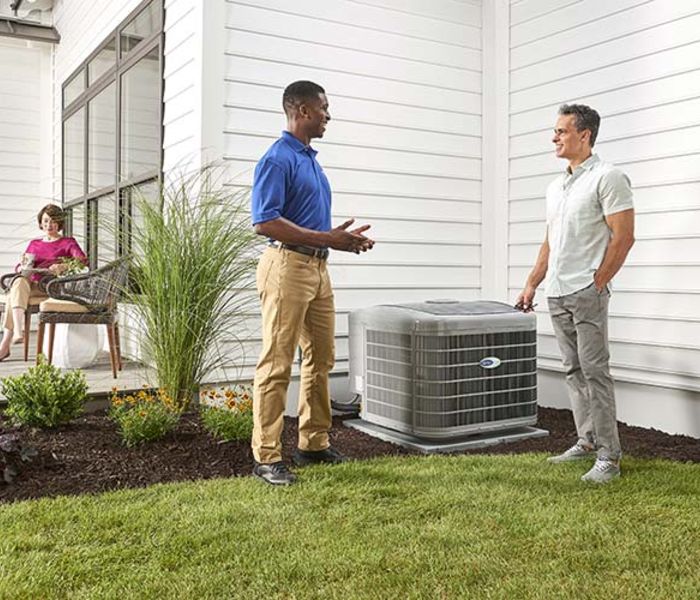 Red Star Cooling & Heating is a locally owned and operated HVAC company in The Woodlands, Texas. The fully licensed and certified team of HVAC contractors have been performing AC installation, AC maintenance, AC repair, and AC replacements in the Dallas region for over 15 years. They offer competitive rates on air conditioning systems, heating equipment, air filtration, and other HVAC services. 24-hour emergency AC repair technicians are on call at all times to assist both residential and commercial HVAC clients with their needs. Red Star Cooling & Heating is a factory-authorized Carrier dealer offering flexible financing options, warranties on parts and labor, and discounts on new installations. Call the customer service team to get a free quote for HVAC services, or visit the main website to learn more. Please complete the form below to get your fast free quote!

Become a Red Star Member, and SAVE!

Homeowners no longer need to be confused about their HVAC system or AC repair issues... We've created this FREE e-book resource to help homeowners understand the most common mistakes to avoid, what to anticipate for their repair services and how to hire the right expert for the job. Get started today by downloading our HVAC 101 guide for homeowners in Texas!

Fill out the form below to download your FREE HVAC 101 E-Book!